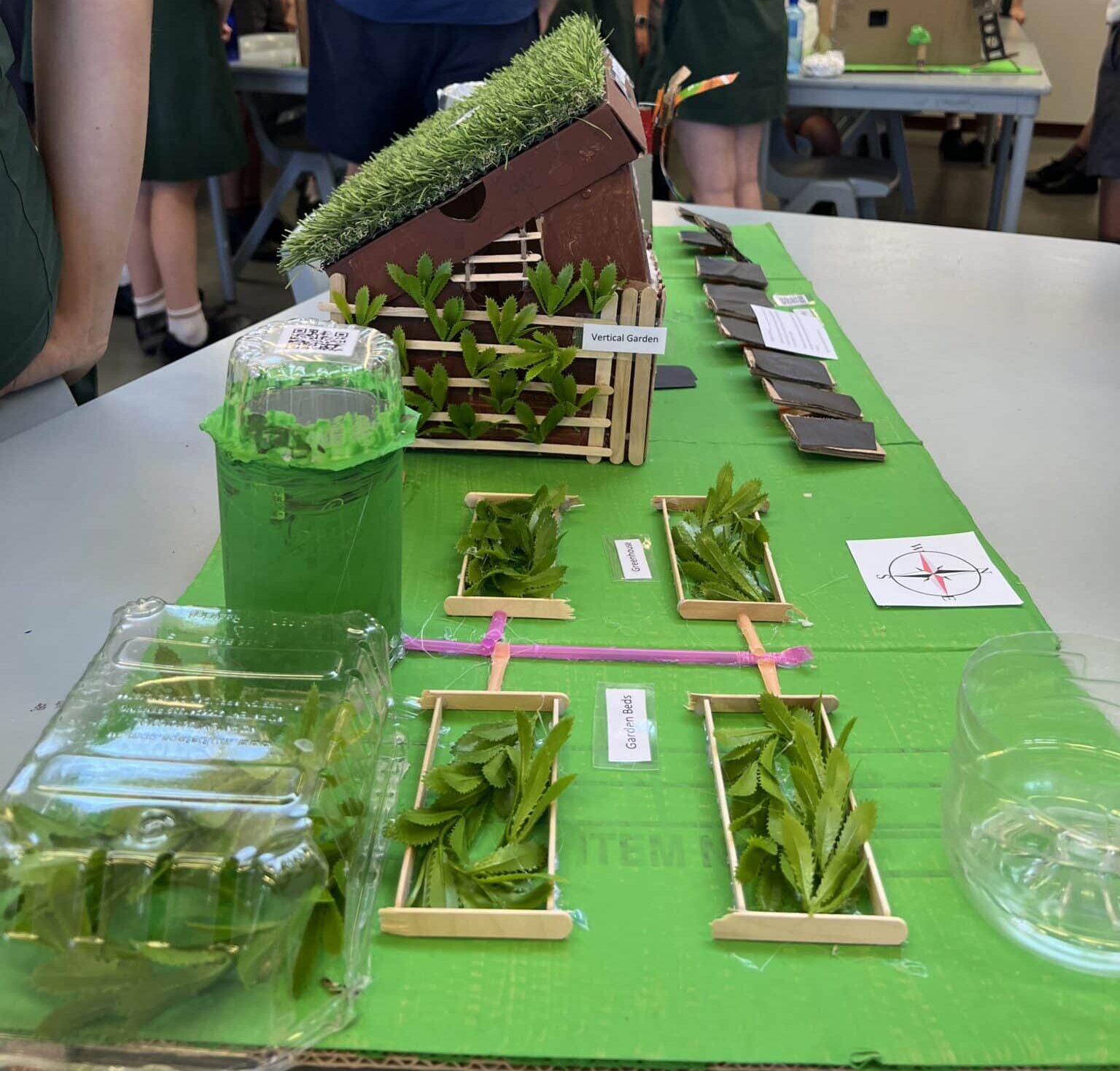 The Year 7’s had a busy few weeks in Science designing a Sustainable House as their final project for 2022. Students were required to look at the topic of sustainability and think about house design and energy production of the future. The planning phase involved students drawing a design for a house either independently or in small groups. The design needed to incorporate the orientation of the house that was most beneficial for solar panels and the heat of the rooms in the house. Students also had to plan the gardens, the placement of the wind turbine and water tanks on their properties.

Students were eager to begin construction of their sustainable homes, many bringing in supplies such as cardboard boxes, aluminium foil, plastics, fake grass, straws with a few students going to the effort of finding actual working solar panels and torque motors to spin their wind turbines. The hot glue guns were kept very busy during the science lessons!

The Year 7 Science Teachers were very impressed with the effort of the students in this task and asked a few students from each class to come and proudly display their work to our Vice Principal, Ms Rox Davies. Ms Davies, who has a background in science teaching, was amazed at the efforts and was excited at the prospect of future sustainable houses after seeing the houses on display in the science laboratory at lunchtime and hearing about the designs from the students themselves.

“It started off with making the blades, and when I made it I thought its good but it’s not good enough, so I could probably make it better. [I changed it] so it had a pen on the end to make it spin, but I thought, what if I can make it spin on its own? I found a little motor from a little drill at home and two batteries, and then I found a battery holder that could hold two batteries and had wires coming out of the end. I hooked the batteries up to the motor which was attached to the blades which made it spin on its own.” – Zac Moloney on the scientific process he followed to make a working wind turbine

“When we first got the investigation, I quickly went onto my laptop to research about sustainable houses; the design of them, the direction that they need to be. I found this really good design and I made some changes to it to have the correct direction for the solar panels and wind currents. Then we added a grass roof for insulation, wool insulation which is all natural, recycled timber to save trees, shutters for ventilation, double glazed windows and the list goes on and on.” – Mack Lancaster on how his group developed their comprehensive house design

“I really liked the house task because normally for our assessments it was written, whereas for this one we were able to build it in a group, working together. We were able to design our vision for the house with what we had brought in and show it to everyone. It was what we believe a good sustainable house would be.”  –  Amelia Hughes on the Sustainable House Task in Science